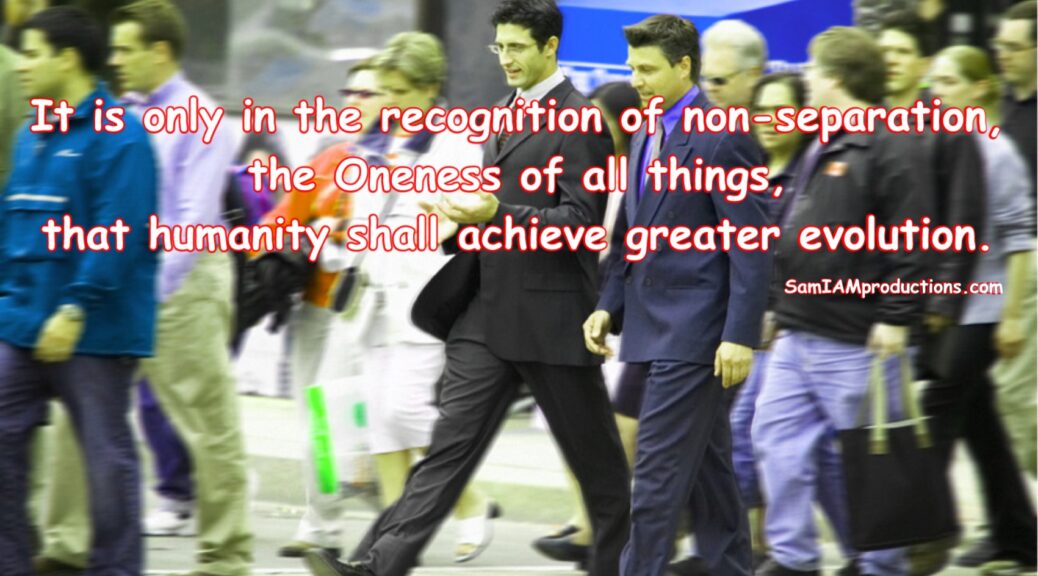 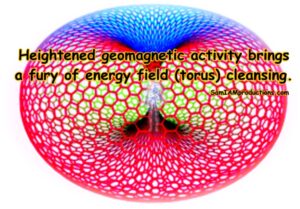 Heightened geomagnetic activity brings a fury of energy field (torus) cleansing. As this activity continues at a rapid unprecedented pace, so too does the clearing, cleansing and transmuting of all that does not adhere to a higher state of consciousness. Everything that does not fit within the higher state of being for humanity’s next juncture in the time-space continuum is being cleared from human energy fields. Each unique energy field (torus) adjusts at its own pace, and for those just beginning to awaken to a higher state of awareness, gross abnormalities are now experienced to be recognized and cleared, allowing one to bump up in consciousness, for all aspects of Consciousness are meant to continually evolve, leaving no life atoms behind in the realm of forgetfulness. 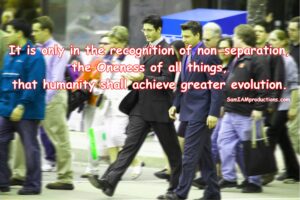 Remember as humanity continues to move through chaos and confusion, the experiences faced assist in helping to clear all that is distorted, all that no longer fits within the Consciousness of Oneness, Love and Light. Recognize these times as opportunities to change beliefs, to choose differently and come together as a global family, unique individuals with unique abilities to change all experience and expression within and upon Mother Earth, for it is only in the recognition of non-separation, the Oneness of all things, that humanity shall achieve greater evolution. 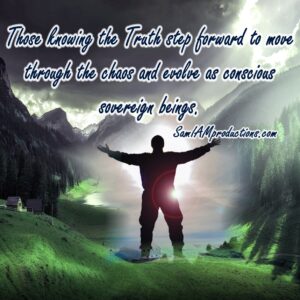 One cannot clear, cleanse nor transmute hidden aspects of consciousness; it is only through the revealing of distortion that one can recognize the need for change and take steps to make that change. As humanity and Mother Earth continue to clear, cleanse, and transmute all distortions from energy fields it is in the best interest of each unique individual to pay attention to what remains in their own unique energy field. Address each circumstance from a point of clarity, keeping in mind the level of distortion that moves one from Oneness to separation. There is NO separation and the time is now ripe to achieve clear, energy fields by eliminating lifetimes of distortion.
~~~~
Be aware that dream times continues to change, often occurring before the usual 90-minute intervals, and vivid dreams assist in clearing, cleansing, and transmuting all distortions from energy fields. Being conscious throughout the day of what is fed with reaction and attention helps to limit negative dream times by freeing the physical brain from needing to process those events

Everything on this website is free and donations to keep it operating are very much appreciated. Support those who support you.  It is as simple as that. Connect through the CONTACT page! 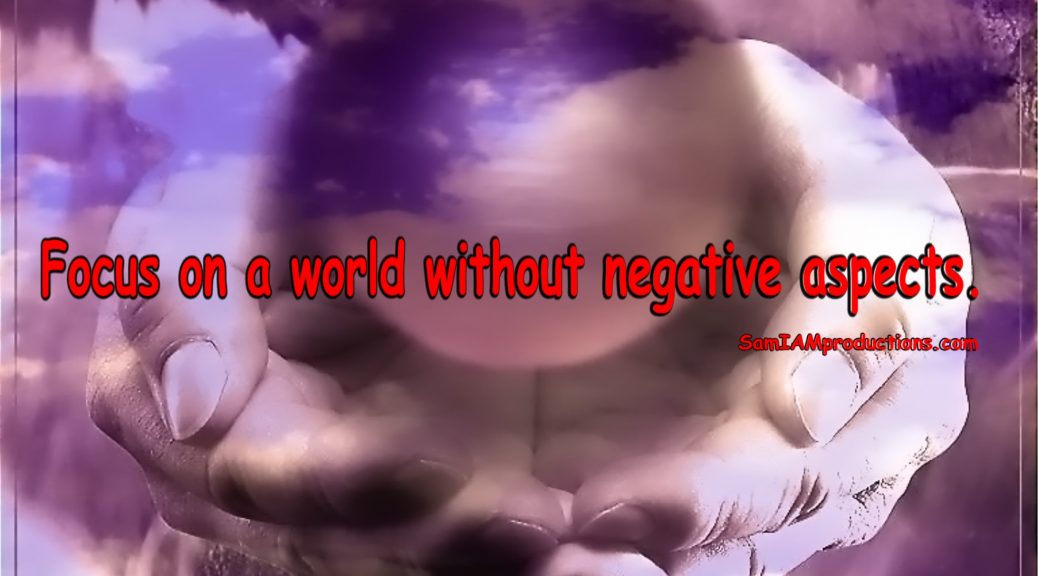 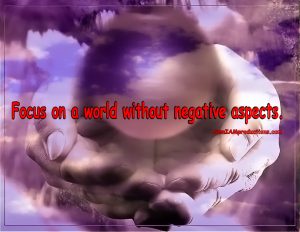 Many of us have noticed gross lifestyle changes creating many disruptions to normal habits during these times of unremitting increased geomagnetic activity. Vivid dreams are of the most vital importance now as they continue to show us the consequences of everyday wanderings, places where we focus our attention, along with tidbits of the massive clearing and cleansing process now occurring while Gaia and all within and upon her increase in frequency. And, even these dreamtimes have changed to occur more rapidly than in the past. 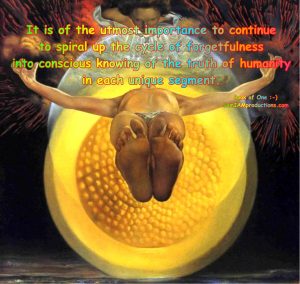 Where we choose to focus our ATTENTION not only affects the dream state, but, most importantly, our everyday affairs as we either spiral up or down in consciousness. Focusing on the negative aspects of duality only serve to continue them in both our waking and dream state. So, let us be clear in our intentions as we move though the days and nights of this mass awakening: our choice WILL lead us through additional chaos and turmoil, or increasing states of bliss and awareness of the True State of being for all things. 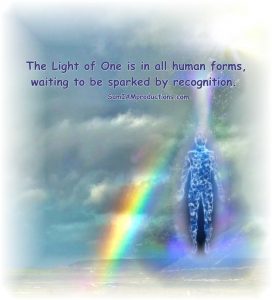 Throughout these past fourteen years I have authored and published sixteen books showing how my personal spiritual awakening unfolded. The first two serve to assist those still living in the world of duality, not fully believing what is noted above, to clear, cleanse and transmute misconceptions. The next two in the series contain resources and tools to assist in healing and spiritual awakening. My favorites of the “Lightworker’s Log Book Series” are the inspirational five volumes of the “Book of One : – ) Series” and After Death Communications…WOW! And then there’s Bits of Wisdom, Spiritual Mind Prayer Treatments: Lightworker’s Log (a collection of prayers from book three), and my last book Multidimensional Living: Moving Beyond Astral Adventures, which, in addition to personal astral and higher realm accounts, holds information on dreams and where they come from. I’ve also authored and published two mini e-books: Earth Angels and Adventures In Greece And Turkey (also in book three); and Return To Light: John Of God Helps (an account of my visit to Brazil). 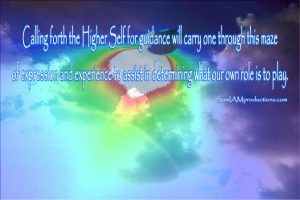 For those beginning to tap into their very own higher aspects, here’s a hint: when journaling or writing blogs, if the piece comes easily, in a clear and concise stream, without mental effort, you are indeed tapping into what can be referred to as higher aspects of your very own Self. AND, I’m EXCITED to relay, having just found online, two days ago, and received just now, yet another sign that what I am doing is my soul’s work, in the form of ordering and receiving, in BRAND-NEW condition, the only printer that will work on my 2005 non-internet connected laptop–a 2002 2210 psc All in One HP printer!!!! 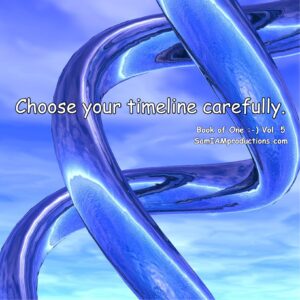 Everything on this website is free and donations to keep it operating are very much appreciated. Support those who support you.
It is as simple as that. Connect through the CONTACT page! 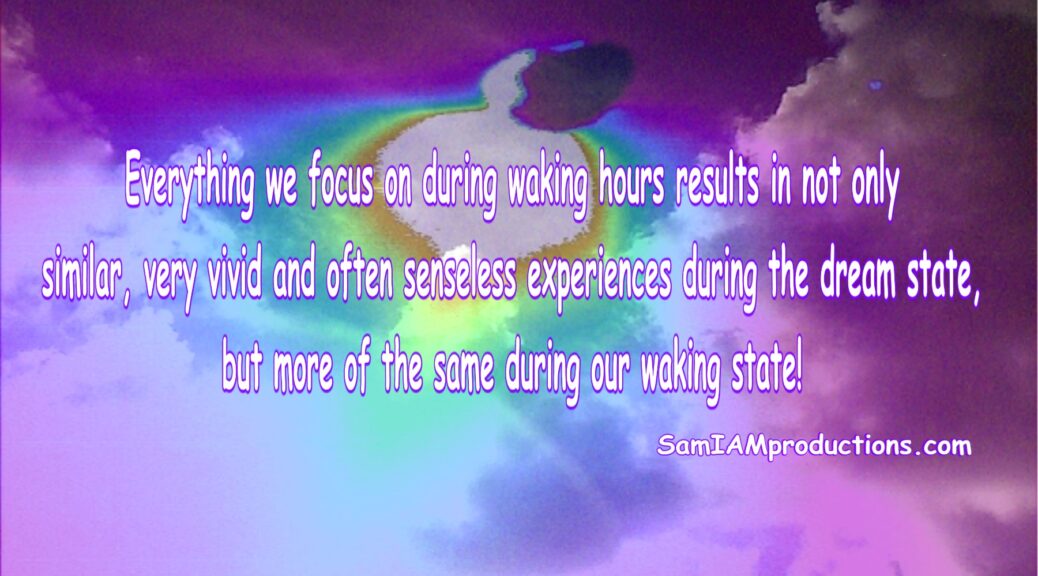 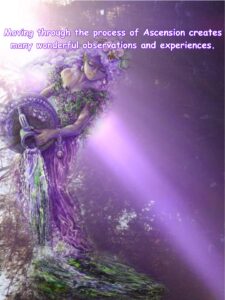 Moving through the process of Ascension creates many wonderful observations and experiences that many people may not be aware of in an unawakened state. Let me just say that the process has been unfolding in an increasingly wondrous manner for me over the past nearly twenty years and now, thank goodness, it is being recognized for what it is, a changing state of consciousness more in tune with our True Nature.

As I continue to move through this process it is clear that what I focus on becomes my so-called waking experience, and what I experience during times when not sleeping is processed by my brain during sleeping hours. During dream time everything is a mesh-mash of experience coupled with higher realm messages and experience of my very own soul on this and other planes of consciousness. And even knowing it is only my own thought forms created by a human seeming in physical form, I am most grateful for those thought forms that guide and support me in what can only be referred to as miraculous ways. 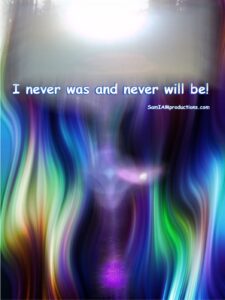 For instance, within days of my son’s passing I began to hear him and we were able to converse in much the same way as if he stood before me in physical form. We seemed to have so very many experiences together, some of which are explained in my first two books. One of the first things he told me was at that time totally unbelievable: “Mom, I never was and never will be,” that’s it, that is all he said. So, for many days turning into months the same thought entered by brain until I finally recognized the truth of this message. Following what seemed to be his guidance I began “Science of Mind” classes, moving on to join other groups and finally landing or should I say soaring as a member of the Theosophical Society.

Yesterday, upon reading an occult book (occult merely means unseen world) I came upon a phrase that floored me because it was one of many, many things I know now to be true, things that came to me without any teachings or readings of books. Find the phrase in The DIALOGUES of G. de Purucker, Conversations between Teacher and Students on Genuine Theosophical Occultism, VOLUME 1. It notes:

“So a human being comes to Earth, is born a child, lives his life, makes his gestures, has his aspirations, his hopes and his hates, and so forth, and finally disappears and we say he is ‘dead.’ Do you suppose that man began when he was born and ends when he dies? That is contrary to all our teaching. As a Monadic Essence he never had a beginning and never will have an end; and the elemental in its evolutionary stage called a thought, follows the same rule….”

How perfect is that to get confirmation, although none was needed, of something that seemed to come from a dead son seventeen years ago? 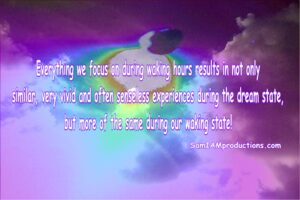 The key points of today’s message is:

#1. Everything we focus on during waking hours results in not only similar, very vivid and often senseless experiences during the dream state, but more of the same during our waking state!

#2. As humans we are here to experience and express uniquely, but we are in essence spiritual beings that never die. To say this in another way, we are focused consciousness and the result of all previous experiences and expressions, and it is time to clear the stream of our consciousness to enable a clear transition to Knowing and Being rather that seeking and doing.

“All thought must, directly or indirectly, by way of certain characters, relate ultimately to intuitions, and therefore, with us, to sensibility, because in no other way can an object be given to us.”
Immanuel Kant (1724–1804), German philosopher. Critique of Pure Reason, “Transcendental Doctrine of Elements: Introduction to Transcendental Aesthetics,” A.20/B.34 (1781).